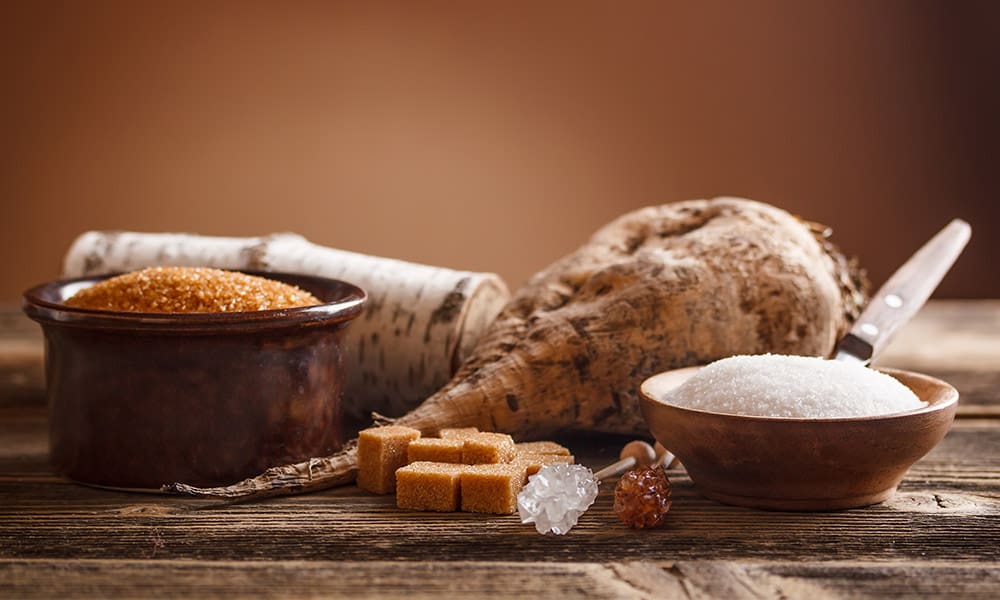 1. Xylitol is Less Sweet Than Sugar

This myth stems from the fact that most sugar alcohols, also called polyols, are less sweet than sugar. Xyltiol is a sugar alcohol, just like erythritol, sorbitol, and maltitol. Xylitol actually has the same or even more sweetness, depending on the study or person you ask. We’ll get more into the details of that in myth #2.

2. Xylitol is as Sweet as Sugar

This is actually a half myth.

I usually recommend using about 75% of the amount of sugar specified in a recipe to get the same sweetness as with sugar.  This usually works out quite well for the consistency of recipes since xylitol absorbs more water than sugar. The exception on the consistency is for desserts that depend on sugar caramelizing, since xylitol doesn’t caramelize.

3. Xylitol Is Dangerous for Dogs

This is true, for dogs and ferrets, but still a half myth.

Dogs eat plums. It’s not good for the too, but the big danger there is them choking on the pit. Of the sugar in a plum, 10% of it is xylitol. So xylitol as an ingredient isn’t the actual problem.

The problem for dogs is pure xylitol without any sugar. Xylitol alone causes an insulin spike in dogs, which can put them into a diabetic comma and very tragically, in some cases, kill the dog.

4. Xylitol is an Artificial Sweetener.

That xylitol is an artificial sweetener is a total myth – just tell that to the plum who naturally contains 10% xylitol or your own body that uses xylitol as a side product of the Krebs Cycle. On the other hand, the xylitol you buy in the store is made in a factory, bulk produced like most of the supplement and vitamins we’re taking, but we’ll talk more about that in myth #5.

We need to talk about this…

In the large-scale world of bulk ingredients xylitol is currently only being made in two ways. In the US and Europe from xylose in birch and beech trees or in China from xylose in corn husks. Both of these processes use nickel together with hydrogen to convert the “wood sugar” xylose into xylitol. The xylitol is then purified to remove the nickel, but traces could remain in the xylitol.

I always choose birch xylitol produced in Europe or the US, both because of the smaller environmental footprint, bus also because the levels of nickel are more tightly controlled. The maximum nickel allowed to be in the finished xylitol is 1mg/kg, which is 1/4th of the nickel in cashews or 1/27th the nickel in chocolate.

I would prefer a different way to mass produce xylitol and would be very willing to promote any company that is trying to do that. But I believe the health positives are stacked in xylitol’s favor.

The biggest threat against our health is the over consumption of sugar.

I agree with those that say we should not eat any sweeteners. No sugar, honey, syrups, stevia, erythritol, xylitol. That’s best.

I also realize that’s not an option for many people, and in that case xylitol is the best tasting sugar alternative, that also protects your teeth, and helps stabilize your blood sugar.

Never Let Technology Keep You from Your Dream!